“The Master said, At fifteen I set my heart upon learning. At thirty, I had planted my feet firm upon the ground. At forty, I no longer suffered from perplexities. At fifty, I knew what were the biddings of Heaven. At sixty, I heard them with docile ear. At seventy, I could follow the dictates of my own heart; for what I desired no longer overstepped the boundaries of righ.” ― Confucius

Its imperative for a Buoduka to maintain a benevolent heart and always behave correctly and responsibly. life itself is honor, and its our responsibility to protect those that are innocent and just.  As a practitioner of budou it’s important that you polish your heart and spirit, this is whats vital to a warrior. life is honor, and we must respect and preserve life, so that mankind can flourish for the greater good of humanity -Melvin Williams

Budou is the spiritual way of the martial arts that all practitioners must follow if they are to be true martial artists. The ideology of budou isn’t simple. The first kanji character on the left mean (bu) 武道 means (warrior, military, chivalry, arms) while the second kanji character (dou) means: (road-way, street, district, journey, course, moral, teachings.) Budou is the way of war and teaching one to become more efficient killers however, even if armed with a blade: a true warrior will find different methods to win without staining his blade; this is very important I think especially in today’s society whereas; life isn’t treasured nor respected. Many believe that one aspect of budou was for a samurai to commit seppuku (ritual suicide) for the sake of honor, but life on itself was honor and the ninja of feudal Japan understood these principles.

Ninja in Japan had a very bad reputation and was renounced as relentless fighters and were called Japanese tengu 天狗 (long nose gobbling/demon.) They were a warrior class that didn’t fit the time in which they lived. Even till this day, the ninja have a worse reputation than the Japanese (mafia) Yakuza. Because of the Japanese media and anime the ninja is looked at as people with superhuman powers who could perform amazing fest. Hollywood made them out to be assassin and thieves who rivaled the samurai. It is a fact that ninja were actually samurai and ninjutsu was a special skill set acquired by the few. The men of Iga province was known as the men with the acquired skill set that made shougun (generals) tremble in terror. They were the BEST! at what they did.

In April 2016 he was promoted to Shihan (11th degree Black Belt) by Grand Master Hatsumi and Dai-shihan Nagato in Japan. 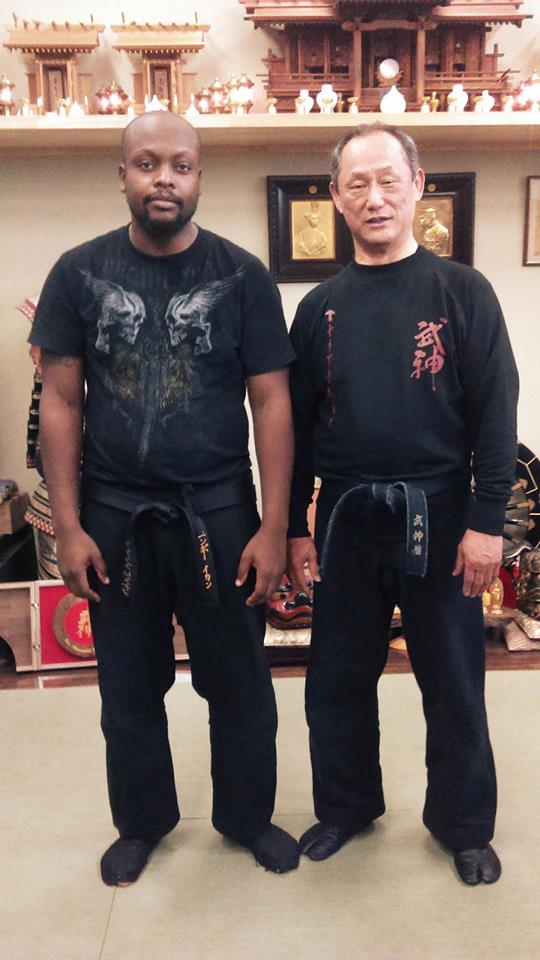 Shihan- Melvin Williams (11th Dan Black Belt) Melvin trains regularly in Japan and solely under the tutelage of Toshiro Nagato sensei and is a regular at Nagato sensei’s practice. Melvin’s movements and philosophies embodies and captivates; the spirit of Dai-shihan Toshiro Nagato. When Melvin’s in Japan he also visits the Hombu dojo to show respect and honor to his soke (grandmaster) Masaaki Hatsumi. Nagato sensei honored Mr. Williams by awarding and recommending Melvin the rank/title shihan (master of teachers/master instructor.) Melvin is the youngest Bujinkan shihan in the world and the first and only black shihan in Illinois… “I just want to honor my master and make him proud. Although, I am proud of my achievement with a pound of humilation; I don’t hide behind a title, and I will forever be a student. I have a lot of more work to do before: I can even think about considering myself good.” -Melvin Williams

Melvin also studies Japanese. He can speak, read and write in the language. He also does a lot of historical research into the ancient (feudal) era of the Japanese ninja and samurai warriors, along with other various studies and research into other koryu arts (classical styles.)