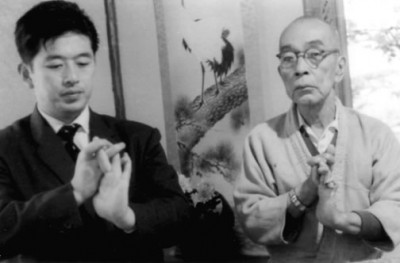 The Bujinkan (武神館) is an international martial arts organization based in Japan and headed by Masaaki Hatsumi. The combat system taught by this organization comprises nine separate ryūha, or schools, which are collectively referred to as Bujinkan Budō Taijutsu. The Bujinkan is most commonly associated with Ninjutsu.
Visit Official Site

Each school consist of its own philosophies, strategies and methodologies. For instance; Gyokko ryu focuses on circular movements and striking pressure points along with striking soft tissues in the meridians of the body. Whereas; Koto ryu Koppo jutsu focuses on taking the linear approach in a fight and puts an emphasis on attacking and moving along 45 degree angles. Togakure ryu is a bit more of a evasive and cunning school. Whereas; Kukishinden ryu is more of stalk and kill the enemy with the more militant mentality.

Takamatsu sensei was the prior soke before Hatsumi sensei. Before Takamatsu died in the very early 1970’s he passed his lineage and traditions to Hatsumi sensei making him heir to the 9 different lineages. Hatsumi sensei is the current grandmaster of the bujinkan and at 84 his movements are still vibrant and cunning!

The 9 Schools of Bujinkan